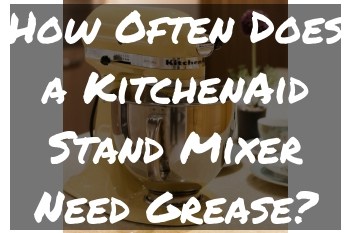 A stand mixer isn’t something that you replace every year. This is an appliance that should last you many years and for the price, it definitely should. However, you’ll have to put in a little work.

All machines require a little maintenance; often, this just means making sure that they are properly lubricated. So, as with the oil in your car or the grease in the bearings of your bicycle, you want to make sure that you grease your KitchenAid stand mixer so that all of the moving parts continue to work the way that they are supposed to.

On average, you should expect to re-grease your stand mixer once a year. That will be enough to protect the parts and greatly extend the life of the unit.

What Kind of Grease Is Used in KitchenAid Mixers?

If you’re shopping for grease, you will find that there are different kinds. KitchenAid stand mixer products are likely using a food-grade grease and this is ideally what you want to use when you go to replace the grease in your unit. Sometimes you can get away with using other greases, such as wheel bearing grease or lithium grease. These tend to be a bit thicker.

When you remove the cover of your mixer, you’ll see that the grease is black and dirty but it probably wasn’t this color from the beginning. Some greases are dark brown or black but most food-grade greases are white in the beginning.

If you need to buy grease, just look for greases that are labeled as “food grade”. Some greases will be specifically labeled for use with stand mixers and those are usually a safe choice as well.

What Is Food-Grade Grease?

Essentially, lubricants that are “food grade” are permitted to come into contact with food. They usually contain different additives and they comply with the regulations that are specific to the food industry. They are also better for certain applications and they can handle the operating conditions of the food and drug industries well.

However, there are three different types of food-grade lubricants:

Food-grade greases perform all of the same functions. They protect the moving parts of the stand mixer from friction, corrosion, and general wear. They dissipate heat and they can even be used to seal gaps between pieces. However, they also have to be effective for specific applications in the food and drug industries.

Food-grade greases will be resistant to degradation from food products, they’ll resist chemicals used in the industry, and they will also resist water and steam. They should be neutral toward plastics and have the ability to dissolve sugars.

Food-grade grease is often white whereas most other greases with be a dark color. That’s one way that you can tell the difference but they will be labeled as well.

Where to Place Grease in a KitchenAid Stand Mixer

When you take your KitchenAid stand mixer apart, not all of the areas that lined with grease. The grease will be seemingly everywhere at this point but you’ll still notice clumps in certain areas and you can feel which parts have been running with the grease as a lubricant.

Grease will go on the gears that are underneath the top of your mixer and it will also go in the casing itself as there are moving parts in there as well.

You can safely put grease on every gear and shaft that you see. You’ll want to grease the ring gear very well.

You can often move the gears around manually and that will show you which parts of the machine move when it’s running. All of those parts need grease.

Any gears that you remove from the machine should be covered in grease before you return them to their location.

If you feel that you are putting on too much grease, you probably aren’t and it’s better to put a little too much than not enough. All the gears on the machine and in the top casing will be caked with grease, often to the point where you can’t see them. You can put the grease on with your hands or you can use some sort of spoon or scoop.

Is Vaseline a Food-Grade Lubricant?

Vaseline is “food grade” to some degree. It’s also edible. That is, you usually won’t be harmed if you eat it accidentally but it’s certainly not a treat.

While Vaseline is more or less food grade, it’s not quite up to par with other greases. In other words, it’s not able to meet the demands of many food-processing work environments. Vaseline may be inert, odorless, colorless, and non-staining but it’s not as effective when it comes into contact with water and it’s also less resistant to dust.

Petroleum-based lubricants such as Vaseline are often used as a base stock, meaning that there will be other things added to them to make them capable of meeting the demands of the food-processing industry.

Could you use it as a lubricant for your stand mixer? You might be able to get away with it as long as you are at home. If you worked at a restaurant and used Vaseline to lubricate a machine, it probably wouldn’t pass a health inspection.

Still, you’d be better off using a food-grade grease as the lubricant for your mixer. A higher-quality grease will last longer and perform better but if for whatever reason, you’re in a pinch and only have Vaseline, you can get by for a little while at least.

How to Re-Grease Your KitchenAid Mixer?

This process of re-greasing your stand mixer takes about an hour and all that you should have to do is buy a tube of fresh grease, which you can usually get for under $10. You will, of course, need a few tools as well — nothing too complicated, but if you don’t have them, you’ll have to get them from somewhere. The necessary tools include:

The job isn’t as simple as just adding fresh grease to the mixer. Ideally, you want to remove the old grease and thoroughly clean the parts inside before applying the new grease.

Re-greasing your stand mixer is a messy job so make sure that you work on top of some newspaper or a drop cloth and wear clothes that you don’t mind getting dirty. Before you start taking your stand mixer apart, you should make sure that the product isn’t under warranty as what you are about to do could void the warranty. The process for greasing your mixer goes this way:

Make sure that you put on the parts in a place where they won’t be messed with. It will help to have a small container where you can put all of the screws and you might also set the parts down in the order that you took them off. This will make it easier to remember what goes where.

You’ll see the grease. It will be black, gooey, and unpleasant smelling. Remove all of that and make sure to apply at least an equal amount of grease when you finish cleaning.

Once you have adequately greased everything, you can start putting the machine back together. Make sure that all of your gears are in the right place and that they are secured. You can then place the top back on the machine and begin screwing things back into place.