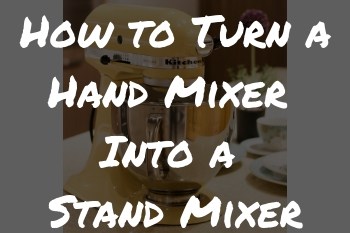 If you don’t like the idea of paying a couple of hundred dollars for a stand mixer, I don’t blame you. Stand mixers are expensive, that is if you want a good one, but hand mixers are an entirely different experience that doesn’t quite match up. That might leave you asking if there’s a way to transform your hand mixer into a stand mixer.

Granted, the biggest difference between the two is the fact that one can mix on its own while the other requires an operator, but there’s really no official way to turn the hand mixer into a stand mixer. You need a way to secure the mixer in place, and you’d be unlikely to find a stand for your mixer that was specifically designed for that purpose. There, at least, aren’t many options.

However, that doesn’t mean it’s impossible. If you’re looking in the right place, you can find a solution, and if you are crafty enough, you can create the solution yourself.

One way you can turn your hand mixer into some version of a stand mixer is to buy a stand. These aren’t extremely common, but I’d recommend looking at Bed Bath and Beyond or a similar store.

The stand that I’m talking about is all wire, and it’s an extremely simple design. The base leaves enough room to place a small bowl, and the stand holds the mixer in place just above the bowl. I’m not sure how effective these will be in practice, and the higher your speed is, the less effective it will be, I’m sure. At the very least, it should allow you to step away from your mixer while it slowly mixes or whips the ingredients.

Other than this, I think you’re going to have a hard time finding a stand that was specifically designed with the hand mixer in mind.

The problem is that all hand mixers are different, so it’s difficult to make a stand that works universally that doesn’t have any flaws. The brands that make hand mixers typically don’t offer stands either. I suppose that’s because they’d rather you buy the stand mixer.

That being said, building your own stand might be a fun DIY project.

Build Your Own Stand

If you think about it, the requirements for a DIY mixer stand aren’t very complicated. You just need to make sure that the mixer and the bowl are secured when you place them in the stand, and there are a variety of ways you could approach it.

The most basic design is just some sort of wooden box. You can create a hold at the top of the wooden box that will be large enough for the mixer attachments to fit through, but small enough that the mixer rests at the top. Directly underneath that, underneath the “box,” would be where you place the bowl, but you’d have to find a way to secure it. Whether you have to box the bowl in or strap it down somehow, that would be enough to ensure it doesn’t move around when you turn the mixer on.

Of course, if you take this route, you’ve got to do some measurements and make sure that the size of your box is right. You need the mixer to rest at the top, but you also need the attachments to come down far enough to be in the bowl. If you’re crafty, you might be able to do this on the first try, but if you don’t do this kind of thing often, I imagine it could take a couple of tries.

I’d recommend looking for an online tutorial if you can find one. It’s sort of an uncommon request, but you might have some luck.

Keep in mind that if you want your stand to last, you are going to have to put some time into it. You need it to be secure enough to handle the vibrations of the mixer over and over again. I don’t think it’ll be too difficult to throw something together really quick, but anything that gets thrown together isn’t likely to last very long.

The Problems with Using a Stand

Even if you were able to transform your hand mixer into a stand mixer using a DIY or store-bought stand, there are still some issues with that approach.

Remember that an actual stand mixer will have a more powerful motor, so even if you were able to set your hand mixer on a stand, you are still limited. Due to the smaller motor, the hand mixer wouldn’t be as powerful, which means you might not be able to handle mixtures that are too thick. More importantly, if your hand mixer wasn’t secured properly on the stand, it might not mix at all. The attachments might get stuck in the dough, and the mixer itself may want to turn instead.

Another potential issue with a mixer stand would be the bowl. You’d really have to make sure that the bowl is secure. If it’s not, the bowl would most likely turn along with the mixer attachments, and if that were the case, your ingredients wouldn’t mix.

If you aren’t prepared to build an effective mixer stand, you might be better off just buying another mixer. No matter how good your mixer stand is, it will never really compare to an actual stand mixer.

If you don’t want to build your own stand for your mixer, I’m afraid you’ll have to buckle down and buy a stand mixer. However, if the idea is to have both types of mixers, you could buy a 2-in-1 mixer.

The 2-in-1 mixers are stand mixers with a detachable mixer, so if you want to hand mix something, you can simply remove the mixer from the stand. Alternatively, if you prefer to use the stand mixer, you simply return the mixer to its location.

Obviously, if you aren’t trying to spend money, this isn’t an ideal solution, but it is pretty convenient. You’d also be able to get rid of your current hand mixer.

These 2-in-1 mixers are nearly identical to a traditional stand mixer, but you have the ability to detach the mixer from the stand. The benefit in buying this is that the stand is already designed to hold a bowl, and the mixer is designed specifically for this stand, so it’s guaranteed to be effective. A hand-made mixer stand might not last very long, but this would last as long as any mixer.

How Much Is a Cheap Stand Mixer?

If the reason you want to convert your hand mixer is money, remember that brands, such as KitchenAid, aren’t your only options. True, these mixers can cost you several hundred dollars, and they are extremely durable and robust, but if you are really on a budget, these aren’t going to be an option.

Thankfully, there are stand mixers that are a lot more affordable than that. If you’re looking in the right place, you can find a stand mixer for under $100, and the least expensive one I’ve seen was about $30.

This looks a lot better than $200 or more, but remember that the quality is going to be far less than what you’d be getting with a high-end mixer.

Keep in mind that turning your hand mixer into some sort of stand mixer would cost you money as well. Whether you manage to find a table-top stand or decide to build one yourself, you’re still spending money. A DIY stand would cost you in material, and when you consider material costs and time, the least expensive stand mixer might be a better investment. Once you save some money or get more serious about your cooking hobby, you can invest in a more sophisticated stand mixer.

There’s a reason that the stand mixer has replaced the hand mixer in a number of households and restaurants across the world. They are extremely convenient, and they allow both professional and amateur cooks to effortlessly mix batters, doughs, eggs, and a variety of other foods. I’d definitely recommend buying a stand mixer over trying to convert your hand mixer into one, especially since you’d likely have to build your own stand, and there’s no telling how long that might take.

The advantages of owning a stand mixer are very clear, and they include:

A new stand mixer would also last a lot longer than any DIY mixer stand that you could make at home. Unless you are really crafty, it’s also going to be a lot easier handling the mixing bowl and the attachments when you have an actual stand mixer.