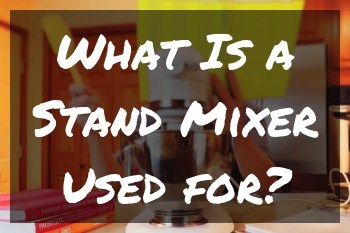 If you’ve been preparing dishes that explicitly call for a stand mixer in the recipe, you might be wondering why or what that even is. Or maybe you’ve recently been introduced to the world of cooking and are looking to invest in a nice, new kitchen appliance.

Regardless, if you are unfamiliar with the stand mixer and its purpose in the kitchen, I can break things down for you.

First of all, a stand mixer is a heavy, stationary mixer with a powerful motor that can handle all sorts of mixing tasks. From eggs to thick doughs, you’ll be able to power through virtually anything and prepare more food in less time. I don’t know about you but I’ve broken more than one spoon trying to hand mix a thick cookie dough; however, with a stand mixer, that’s never an issue. You won’t need to tire your arms out baking cookies either.

What Can I Use a Stand Mixer for?

What can’t you use your stand mixer for? Stand mixers are used for mixing, mashing, whipping, and churning and the high-end mixers have all sorts of attachments that only widen the space of possibilities. I know that KitchenAid mixers have attachments for grinding meat, preparing pasta, making juices, and churning ice cream, among other things, but other brands will be able to offer additional capabilities as well.

Anything that you would normally mix with a hand mixer or a spoon can be tossed into the stand mixer and you’ll get the same, if not better, results. This includes:

I’ve seen people use their stand mixers to shred chicken and pork as well. These are multi-purpose machines with different attachments for different tasks. Most mixers come with a whisk, a standard mixing tool, and a dough hook for kneading.

You’ll see stand mixers in restaurants but there are several reputable brands that produce mixers for the homeowner. They’re an essential item for people with cooking hobbies but even if you do not make cooking a hobby, you’ll still find the mixer useful.

Anybody can use a stand mixer, and there are no rules about who can or cannot buy one. Restaurants and other establishments might use large, industrial-sized mixers for producing large batches of dough or batter. But anybody with the money and the counter space can have one in his or her kitchen. Some people use their mixers on a daily basis and others may only use their mixers once a month. Even if you don’t feel tempted to shell out the cash for a high-end mixer, there are several affordable options that might be better suited for your cooking habits.

The point is that the mixer is going to make your life easier whenever you need to mix something. If you aren’t serious about cooking, I don’t think that there is anything wrong with purchasing a cheap or smaller-sized mixer.

Why and When to Use Your Stand Mixer

As I said, anybody can use a stand mixer for anything that he or she wants to mix but they are particularly useful for hard-to-mix recipes and when you need to cook for a large group of people.

Stand mixers come in different sizes so if you are feeding a lot of people, a bigger mixer is always better. Otherwise, you’d have to mix everything by hand and if we are talking about several batches, you’d be exhausted by the end of it. A large, 8-quart mixer, for example, could mix multiple batches at once, which means that you’ll finish your dish sooner and with far less effort.

I can also tell you that if you cook a lot of bread, a stand mixer will be extremely helpful. A high-end mixer with a powerful motor can knead bread over and over again without getting tired and you can choose between a spiral dough kneader and the traditional shaped hook.

Aside from making things easier, a stand mixer could enable you to cook other things that you wouldn’t be able to before. For example, if you had a pasta-making attachment, you could cook your own pasta from scratch. You could also grind your own meat and make your own sausage. The mixer itself will mix together the ingredients and the attachment provides the extra functionality.

Mixers are especially useful when a recipe calls for one. Sometimes the recipe may ask you to mix the ingredients for several minutes, which would be exhausting if you did that with a spoon. The mixer allows you to do this effortlessly.

Oftentimes, your mixer will help you get better results with your recipe. The mixer maintains a constant speed and you can sit and watch as all of the ingredients mix in with each other. Many recipes will tell you how long to run the mixer so you always getting maximum results.

How to Use Your Stand Mixer

Stand mixers are pretty simple machines but I do recommend going over the user’s manual before you dive into it.

Most of the machines are straightforward and the better brands will make it easy to do whatever you need to do. Even though there are tons of different attachments, using the attachments is more or less the same every time. Each of the beaters will have a locking mechanism and it is as simple as inserting the beater and turning it to lock it into place. You’ll do the reverse of that to unlock and remove the beater once you are finished. If you are using a bowl-lift stand mixer, you’ll use a similar process to secure the bowl to the mixer.

The mixers also have a minimal number of settings so there aren’t confusing buttons. Really, the only thing you’ll use is the speed settings; some mixers have as many as 10 different speed settings.

I definitely recommend starting off slowly when you go to mix ingredients. I have wound up with a few spills from running the mixer on high. Oftentimes, there will be a “stir” setting, which will lightly stir the ingredients until they begin to mix. Once you see the mixture begin to take place, you can ramp up the speed a bit.

Many mixers are also equipped with timers and other settings. The timers allow you to walk away from the mixer and do other things. The mixer will continue mixing until the timer goes off. Otherwise, you can stay and adjust the speed as you go, switching between slow and fast if necessary. You can monitor your doughs and batters and you’ll be able to devote all your attention to the quality of the mixture as opposed to the actual mixing.

Picking Out a Stand Mixer

When you are going to pick out your stand mixer, start thinking about what you want it for. Are you planning on doing a lot of baking? Or is this something casual? Are you interested in the pasta maker or meat grinder? How many people are you usually going to be cooking for? What’s your style?

There are two types of stand mixers and I’d suggest deciding which one you like best before considering the other buying factors. The first type of mixer, a tilt-head mixer, uses a lever-like arm that moves up and down, allowing you to easily remove attachments and gain access to the bowl and its contents. With a bowl-lift mixer, the bowl lifts up to the mixing part where it can be secured into place.

There are advantages and disadvantages for each mixer but I’d recommend visiting a store so that you can see each one while they are on display.

Once you’ve settled on a type, you’ve got to pick out the size and the color. I know that KitchenAid has a ton of colors but some models will be limited. As for the size of your mixer, you’ll want to think about what you’ll be using the machine for. Sizes typically range from 3.4 quarts to 8 quarts but from my experience, anything over 5 quarts might be too big for the average person. A 5-quart mixer can handle a lot of ingredients and it has got enough power to work with some of the toughest doughs as well.

A lot of people can get by with a 4.5-quart mixer or smaller. If it is just you and your spouse, for example, I wouldn’t buy a large mixer. If you aren’t using the full capacity of your mixer, it is easier for the ingredients to slosh around, which is going to make it harder (and messier) to mix the ingredients.

Your mixer should come with the three major attachments that I mentioned earlier but if you want something extra, you might check for package deals of some kind. Sometimes brands will sell, for example, a pasta-making attachment with their mixers so that you do not have to buy them separately. Otherwise, you can pick and choose which attachments fit your cooking interests.