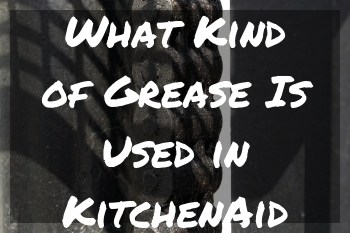 The grease in your KitchenAid mixer acts as a lubricant for the internal gears, and without it, you’d have some serious problems. The grease dissipates heat and friction, and it also prevents the metal components from wearing or rusting.

I know that KitchenAid puts enough grease in the mixer to last for the mixer’s lifetime, or they, at least, say they do. Under the right conditions, the oil can leak, which would mean that your mixer needs to be serviced.

Over time, the internal grease is going to get dirty and potentially less effective, which is why many stand mixer owners suggest replacing the grease about once a year. This gives you the opportunity to clean the gears and run fresh grease through the machine. It’s a form of maintenance, and it’s said to improve performance and extend the life of the machine.

If that’s why you are here, I can tell you that it’s not very complicated. It’s not as if KitchenAid uses some special grease that nobody has access to. The KitchenAid stand mixers use a typical food-grade grease that is accessible to everybody. Specifically, I’ve heard that they use Shell Darina #2 grease, but you can use any food-grade grease.

Other types of grease might work, and some people actually use Vaseline, but I’d recommend getting a grease that more closely resembles what they use in the factory, and these won’t be difficult to find.

What Is Food-Grade Grease?

Food-grade grease is the grease that has been designed for specific applications, namely those where contact with food is either possible or inevitable. There are three types of food-grade grease.

Essentially, these greases are made differently so that they are less toxic. Unlike some other greases, these won’t contain heavy metals or carcinogens, among other contaminants. Food safety is huge in the food processing industry, so these lubricants must comply with all of the industry’s safety regulations regarding food and health.

Food-grade greases still protect against heat, friction, oxidation, and general wear, but they are also resistant to certain chemicals, water, and degradation from food products.

I would say that the KitchenAid mixer probably uses H1 lubricants in their mixers. Food contact isn’t necessarily guaranteed, but there is definitely a possibility. Sometimes, oil leaks through the planetary housing and into the mixing bowl, for example.

On the other hand, they might use H3 lubricants for safety reasons. H3 lubricants often contain edible oils, but regardless, as long as the grease you use is “food-grade,” I don’t think there is any risk.

Why Is it Important to Use Food-Grade Grease?

I mentioned above that you should definitely use food-grade grease for your mixer over something such as Vaseline or non-food-grade grease, and this is especially true if you use your mixer in a restaurant or to make food for other people.

Let’s say you use a KitchenAid at your restaurant that gets a health inspection, at least, once a year. If your mixer were to be leaking oil on the day of the inspection, and it was discovered that the grease wasn’t “food grade,” that would most likely be a violation. So, if you are running a business, it’s obviously important to comply with the health and safety regulations.

In general, though, it’s important to use food-grade grease because you don’t want anybody to accidentally ingest toxic chemicals. Food-grade grease is odorless, tasteless, and physiologically inert, so they are designed for food environments and food-related products.

Of course, there is no health inspector that will be coming by to inspect the KitchenAid mixer in your kitchen at home, so using the wrong kind of grease isn’t as risky. I’d still recommend sticking with food-grade grease for safety reasons.

Where Can You Find Food-Grade Grease?

If you’ve got to buy grease, you might as well get the most appropriate grease. Food-grade grease doesn’t cost any extra, and it’s not difficult to find.

The cost will depend on the size of the container, but I’ve found tubes of food-grade grease for under $10. You can also buy small tubs for around the same price, and while I’m sure you’d be able to find these products at a hardware store, a home improvement store, or some other department store, you can also buy the grease online.

You’ll find a number of products on Amazon, for example. In fact, the items are usually labeled as “KitchenAid grease,” “food-grade grease,” or something similar, so it’s easy to find what you’re looking for. Some greases are labeled as “biobased.”

Remember the food-grade grease classifications that I mentioned earlier. When you are browsing the web for a grease, look for the H1 classification, and also check to see if the grease has NSF approval.

When to Change the Grease in Your Mixer

I suppose people will have different answers for when to change the grease in your stand mixer, and I’m also sure that some people never actually do it. If you can disassemble and re-assemble your mixer correctly, there’s really no downside to replacing the grease. All you’re doing is keeping the machine clean and ensuring there is enough grease for the machine to run smoothly.

The general rule is that you should replace the grease once a year, but that’s for regular use. If you use your machine heavily, you might want to do it twice a year.

The big thing to watch out for is leaking oil. If your KitchenAid mixer is leaking oil, there’s an issue with the grease that’s in there, and if you allow it to continue leaking, it will eventually cause some problems. Ignoring a leak could result in damage to the mixer, so if you see oil coming out of the sides of your mixer or from the planetary housing, I’d recommend having it serviced.

If you don’t want to pay to have it serviced, you can disassemble the mixer yourself, clean the gears, and replace the grease.

How to Put Grease in Your Mixer

Re-greasing your stand mixer isn’t too difficult, and from my experience, the whole process takes about an hour. It’ll definitely be messy, so make sure that you prepare a spot and wear clothes that you aren’t afraid to get dirty.

I’ll break down the process here briefly, but you can find more in-depth walkthroughs. There are plenty of picture guides and video tutorials that will explain everything.

There are screws on the top of your mixer and on the underside of the tilting head. All of the gears are located on the top just above the area that does the actual mixing. However, you’ll have to remove the planetary house to free the top cover. The basic process looks like this:

The top cover contains some of the gears and the motor of the mixer. When you take it off, you’ll see the gears, and you’ll also see the grease, which will be dirty and black.

Your goal is to remove that grease and clean the area to prepare it for the new grease. Removing the grease from KitchenAid stand mixers is messy, so I’d recommend wearing a thin pair of rubber gloves. When applying the new grease, you are going to slather the gears until they are completely covered. You’ll also put some grease on the gears that are located inside of the top cover. This is where the video tutorials come in handy because you’ll be able to see how much grease needs to go in the mixer.

The new grease should help keep your mixer running smoothly for, at least, another year. Just remember the order in which you remove the pieces so that you re-assemble the mixer correctly.